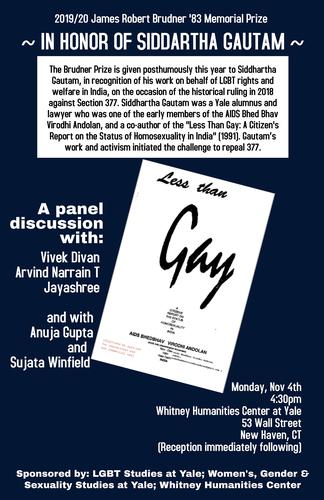 The Brudner Prize is given posthumously this year to Siddhartha Gautam, in recognition of his work on behalf of LGBT rights and welfare in India, on the occasion of the historical ruling in 2018 against Section 377. Siddhartha Gautam was a Yale alumnus and lawyer who was one of the early members of the AIDS Bhed Bhav Virodhi Andolan, and a co-author of the “Less Than Gay: A Citizen’s Report on the Status of Homosexuality in India” (1991). The work of Gautam and his colleagues in ABBVA initiated legal challenges to repeal 377.

Section 377, a relic of the British colonial state, was struck down in 2018 by the Supreme Court of India which ruled that consensual homosexual sex between adults was unconstitutional, though it retained the law in relation to  sex with minors, non-consensual sexual acts, and bestiality.  The campaign to repeal has been decades long, with major legal work done by the Naz Foundation and the Lawyer’s Collective, the activism of numerous groups such as the Delhi-based “Voices against 377” comprised of LGBT, Women’s and Human Rights activists, and the individual litigants who braved public and political ire. “Section 377 is irrational, arbitrary and incomprehensible as it fetters the right to equality for LGBT community” said Chief Justice Deepak Mishra. The prize recognizes the immense fortitude and courage portrayed by numerous people who sought to change public discourse and norms around the subject, and particularly recognizes the work done by a number of legal teams in changing the law, including  Menaka Guruswamy, Shyam Divan, Anand Grover, Saurabh Kirpal,  Mukul Rohatgi, Ashok Desai,  Arundhati Katju, Arvind Narrain, Jayna Kothari and Vivek Divan.

This year’s prize event will include a panel discussion with:
Vivek Divan
Vivek Divan works on the intersections of law, health and sexuality and has been a queer activist for over two decades. Vivek received a B.A., LLB (Hons) from National Law School of India University, Bangalore and his LL.M. from Cornell University.
In 2000,  he was brought on to manage the Lawyers Collective’s HIV/AIDS Unit, and part of the team that filed the Naz Foundation petition in 2001, challenging the constitutional validity of Section 377 of the Indian Penal Code. He was centrally involved in legal research and strategy and leading extensive community mobilization around the case then, and revived the process of community dialogue in recent years leading up to the victory of 2018.  From 2012-14 he was Policy Specialist at UNDP’s HIV, Health and Development Group in New York where he provided advisory and technical support on law, access to justice and human rights in the context of key populations affected by HIV, and helped set up and served on the Secretariat for the Global Commission on HIV and the Law (hivlawcommission.org), and was a member of its Technical Advisory Group from 2009-12. His recent work includes writing on LGBTQ rights issues, drafting health-related legislation, and reviewing and recommending health- and sexuality related law reform and policy as an expert advisor to non-profits, governments, and UN agencies.
Arvind Narrain
Arvind Narrain is a founding member of the Alternative Law Forum in Bangalore, India, a collective of lawyers who work on a critical practice of law. Arvind received his Bachelor’s degree in law from the National Law School of India University (NLSIU) in Bangalore followed by a Masters in the University of Warwick on a Chevening scholarship. He has worked on human rights issues including mass crimes, communal conflict, LGBT rights and human rights history. He has been a part of many fact-finding reports on sexual minorities in India and was also part of the litigation team which argued the constitutionality of Section 377 before the High Court and the Supreme Court in India. He was actively involved in working on child rights and juvenile justice at the NLSIU Centre for the Child and the Law. Currently, he is Director of Research and Practice at ARC International, an NGO based in Geneva and devoted to LGBTQ advocacy.
T Jayashree
T. Jayashree has written, produced and directed for International Television, Radio, feature films and Independent Documentaries for over 2 and a half decades. Her award winning work focuses on the intersection between gender, sexuality, law and public health. Her films are widely screened around the globe and can be viewed at https://vimeo.com/jayashree.  T Jayashree founded Queer archive for memory, reflection and activism  (QAMRA) in Bangalore in 2017. QAMRA is an intitative grown out of her vast collection of raw footage on queer life and movement in India. (www.qamra.in)
Sujata Gupta Winfield is an immigration attorney based in Athens, Georgia and is Siddhartha Gautam’s sister.

Anuja Gupta is Siddhartha Gautam’s sister and is the founder and executive director of RAHI Foundation, India’s first incest and child sexual abuse response organization. She was awarded the Ashoka Innovators for Public Fellowship and has worked in the human rights and development sector for two decades on issues on child rights, gender-based violence, HIV/AIDS and sexuality.